With respect to heritage and an eye to the future, TANDEM’s work at Lennon Mills looks to establish an ambitious, next-generation productivity hub in Melbourne’s untapped inner west.

Industrial precincts have a reputation for being society’s unseen engine room; the gritty peripheral backstage of the city, often lacking a cohesive sense of place and visible design presence. Lennon Mills, a project by TANDEM for development group Perri Projects, intends to shift this thinking.

Having previously delivered the design of Perri Projects’ new headquarters for Scalzo Foods, the longstanding client invited TANDEM to apply their sophisticated, responsive approach to creating an entirely new precinct adjacent to the railyards in Kensington.

Situated three kilometres from the CBD, this ambitious plan intends to reframe the way industry and commerce intersect in Melbourne. The sprawling site enjoys advantageous proximity to existing infrastructure in the South Kensington railway station and the development of the Dynon Urban Renewal Precinct. And though the largely underactivated zone could be described as being literally and figuratively on the wrong side of the tracks – it is one that the client sees as a terrific opportunity.

“Perri Projects are a unique developer in that they’re really interested in projects that change the city,” says Tim Hill, director at TANDEM. “ – they take a long term view of the impact they have on our city.”

TANDEM worked with Perri Projects to identify and explore a range of opportunities.

“This is a site that has multiple possible futures, which are impacted by changing population, market and planning factors. Our job was to help Perri Projects envisage how the project could be developed in stages, always maintaining the flexibility to adapt to new opportunities that may present themselves”, says Hill.

The design and masterplan approach incorporates a range of strategies to maintain this flexibility encompassing structural, servicing considerations as well as the potential for the future integration of mass transport via the railway. 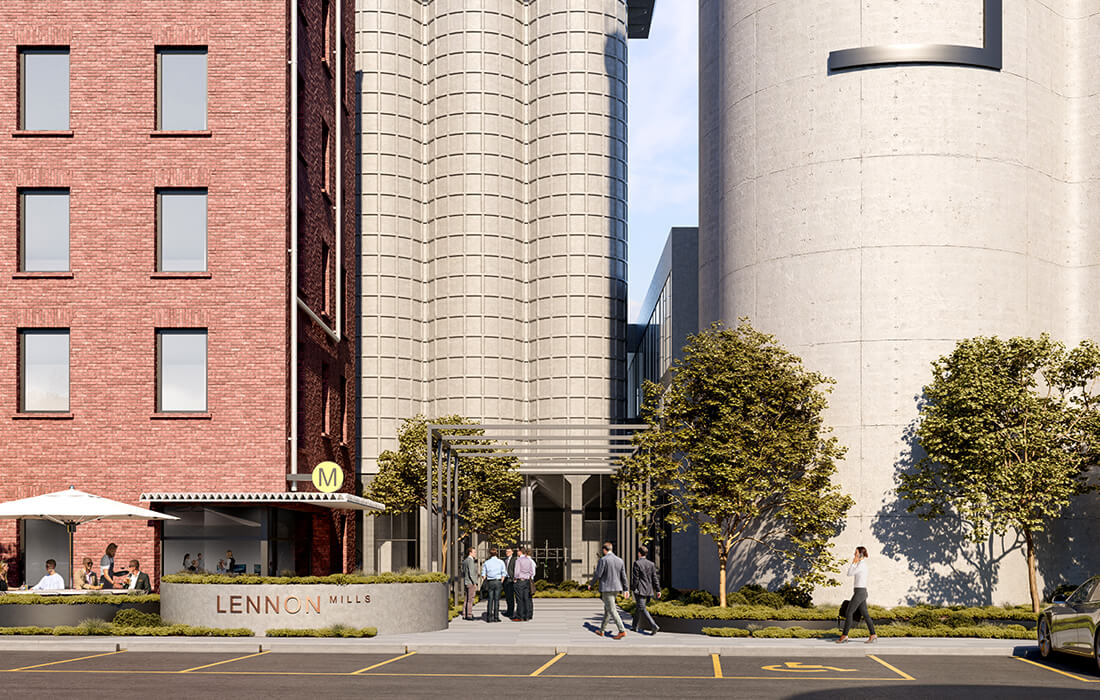 The first stage in this long-term master plan establishes fluid warehousing capacity for businesses with goods coming off the docks for distribution into town. Direct access to the highway and railway will enable seamless integration into the broader Melbourne transport network, an ideal location for companies with need of car parking and public transport, whose client base is close to the city.

Subsequent phases will cater more specifically toward enterprise and commerce, laboratories, light and advanced manufacturing as well as creative industries. Crucially, the convenient connectivity of the site allows businesses the rare prospect of having all of their operations, including manufacture, warehousing, distribution and offices co-located on one site, offering greater cohesion. Further plans will enhance cultural amenity with studios, exhibition halls and commercial space, positioning Lennon Mills as an active hub brimming with innovation and enterprise.

While the project is emphatically forward-looking, TANDEM’s proposed design serves as a logical extension of the area’s existing identity, reimagined to anticipate the needs of a 21st-century workforce. A tailored response prioritises contextual relevance, through extensive use of brick and visible relationships to Lennon Mills’ industrial past.

“We’re really looking at the future through the lens of the past,” says Tim. “There are a lot of interesting older buildings here that are being kept as showpieces, but aren’t apparent on first view.”

The site encompasses a number of architecturally significant silos and an old flour mill, with most to be restored and kept as celebrated relics of a bygone era. Other volumes will provide practical commercial space, offering a range of small to large-sized office plates. The idea is for central buildings to form a dedicated professional business hub, within convenient reach yet functionally distinct from the manufacture-facing offices provided in the warehouses.

Given a fairly open brief by Perri Projects, the TANDEM team engaged the client in a visual dialogue to record initial concepts.

“We worked hard through the lockdown of 2020.  Perri gave us a free hand and we explored many aspects of the site’s potential, through hand sketches, computer and physical models,” says Tim. “And they really responded to that. So through the process, we fleshed out and edited those initial ideas into what formed the groundwork of the project, and further stages to come. It’s something I think we will be referring to for the next few years.” 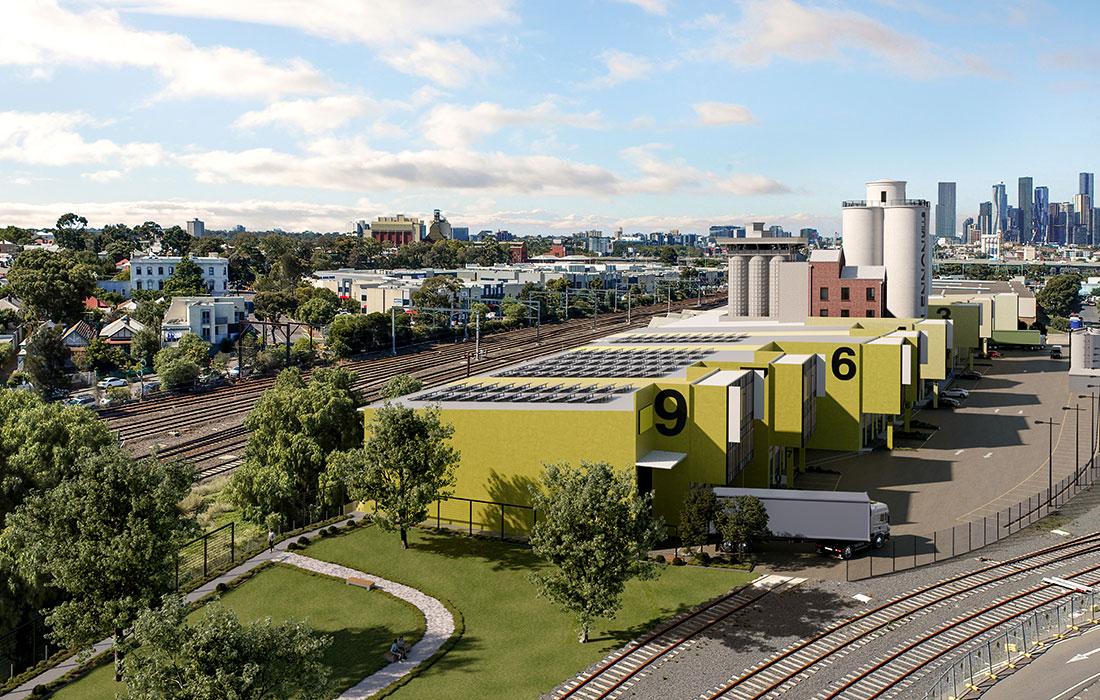 Beyond warehousing and distribution, future iterations of Lennon Mills may see commercial office space, retail, cultural uses or even housing included as part of the broader precinct plan. Kensington has a blue-collar history of work and residences being intermingled – the Younghusband building being one notable example – and a dynamic mix-use is integral to the fabric of the area. But since the open nature of the project lends itself so well to a range of industrial uses, the trajectory of Lennon Mills will ultimately be shaped by the various businesses that take up tenancies.

“It’s difficult to tell where it will land at the moment – but it’s an incredibly interesting site for its position and potential, and the kind of energy and vision that Perri Projects bring to their work,” says Tim. “We’ve never had a client who is more excited about doing interesting developments. It’s all about producing quality lasting solutions rather than satisfying short-term interests, and that’s really refreshing. Their metrics are so different from other developers out there.”

TANDEM sought opportunities to establish Lennon Mills as a place for people to live as well as work, where a community can organically converge. An inviting atmosphere is enhanced by green roof terraces and landscaping, with a pedestrian-friendly ground level and strategic plans for hospitality venues throughout. Perri Projects’ dogged pursuit of exceptional design outcomes is also reflected in their conscientious energy and sustainability targets, with the intent of Lennon Mills achieving net-zero carbon in both construction and operation phases.

“We’re not sure that we can get there – there’s a long way to go to get to that point, and it will mean a mix of offsets in the strategy,” says Tim. “But it’s great to be working with a business that is actively trying to address some of the problems inherent in our profession.” 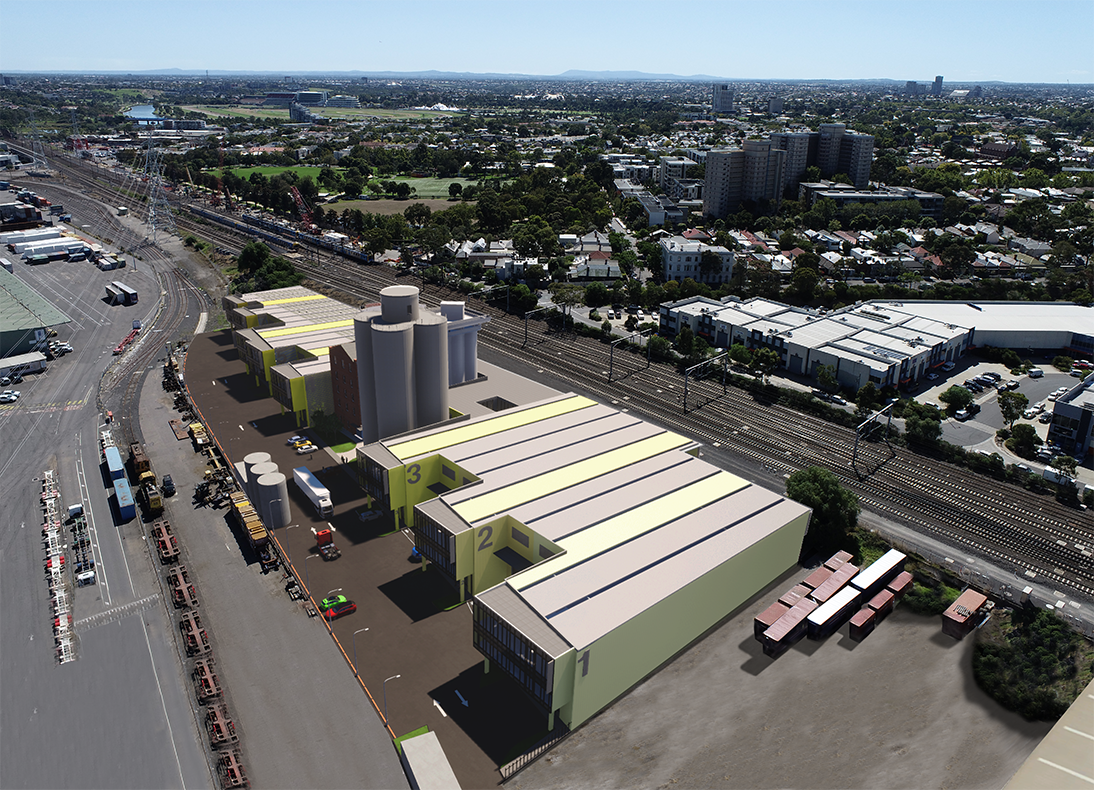