Melbourne’s stringent and lengthy 2020 COVID-19 lockdown would seem an unlikely time to galvanise an ambitious project – but in TANDEM’s experience, chaos can sometimes yield unforeseen opportunity.

Following a sudden pause in client projects and the arrival of JobKeeper, the studio found themselves in a position to offer their services pro bono, to support the Lions Club of Footscray. The group’s community housing village in West Footscray, which was established in the 1960’s, badly needed redevelopment. The Footscray Lions Cooperative Village, is currently home to 21, predominantly elderly Filipina women.

“We found out about the project years ago, but at the time we just didn’t have the capacity to do anything about it,” says Tim Hill of TANDEM Design Studio. “So it wasn’t until COVID hit and all our projects stopped, we thought: rather than sit here, how can we use this opportunity to do something useful?”

A strong advocate for the Lions Club village redevelopment is Lions Club member and past president, Bert Jessup. He joined the club in the mid-90s after a stint as elected councilor of the City of Footscray. Built modestly through community fundraising in 1961, the village of small units had always been maintained by club volunteers, a role which Bert took up upon joining the group. Even then, conversations regarding the future viability of the residences were already underway.

“I said to the president at the time, ‘I’ll look after the village while we work out what we’re going to do with it,’” says Bert. “That was 20 years ago, and I’m still here!”

“Of course, we could see the same problems Bert could see; that the buildings weren’t in great shape, that there was a demonstrated community need,” says Tim. “It was clear that we could potentially make a really positive contribution to the future of the village.” 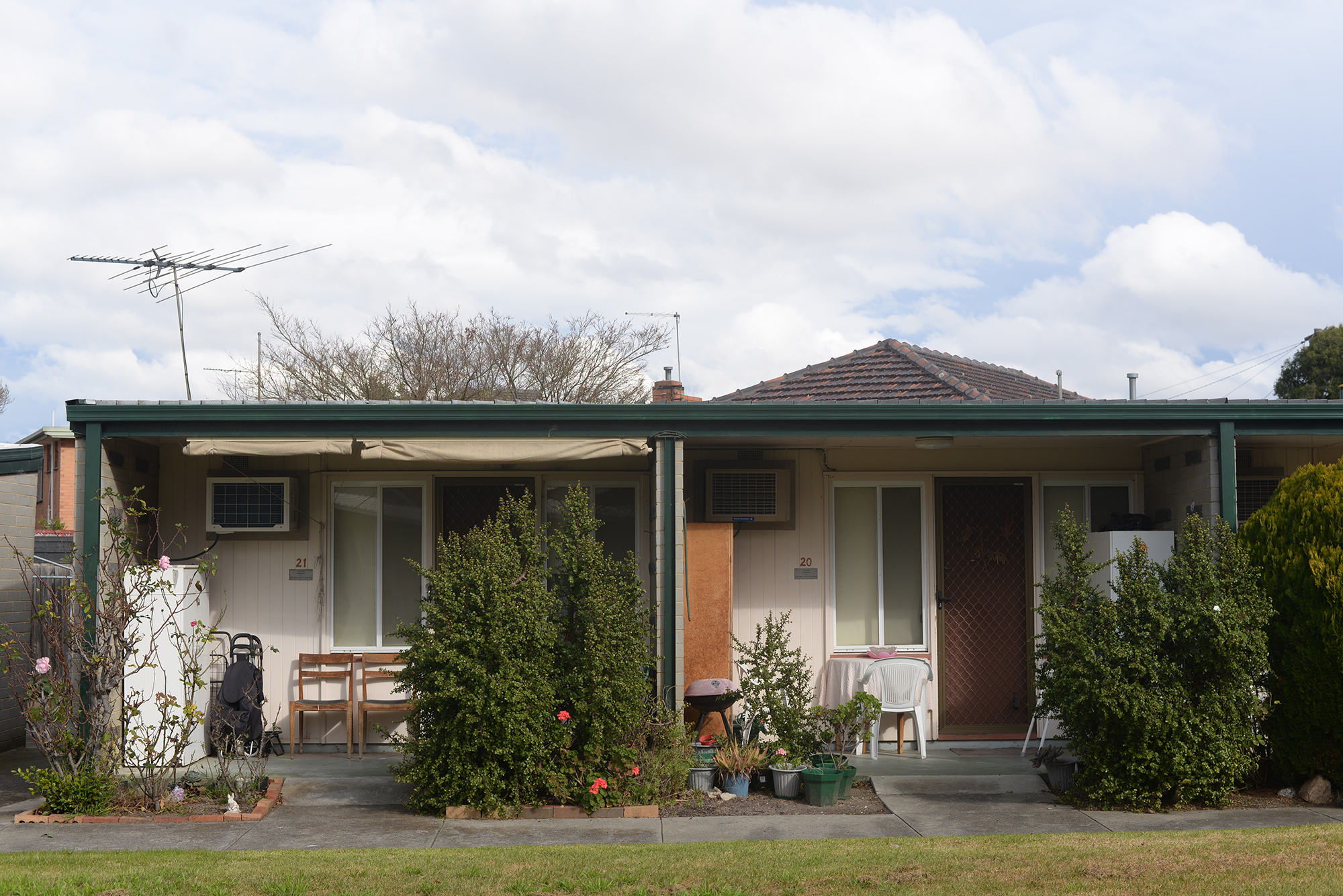 Working closely with Lions Club to understand the tenants’ specific needs and broader significance of the site, TANDEM posited a new design that would allow them to more than double their capacity from 21 to 49 units. Recognising that upscaling the operation would require partnership with a dedicated housing provider, Bert and Tim found an ally in Peter Sibly, general manager at United Housing Co-Operative. Based in Melbourne’s inner west, the not-for-profit organisation works to provide affordable housing for those in need.

“At the Footscray Lions Cooperative Village, we’re working with another non-profit to deliver a real community-led response – an older person’s village which will provide great social outcomes,” says Peter. “With TANDEM, we’re building homes for people’s inevitable loss of mobility, so they can happily age in place. If we can manage it, that’s the best way to house people – to give them sustainably good quality of life.”

Taking a cue from the existing structure, where homes are positioned at the perimeter of an open lawn, the new development will form an intimately scaled linked neighborhood around a central green courtyard. The design places gatherings and incidental interactions at the heart of the project, honouring the residents’ strong ties and cultural preference toward communal living. Apartment layouts also support the option of co-living, with some residents accustomed to shared accommodations. 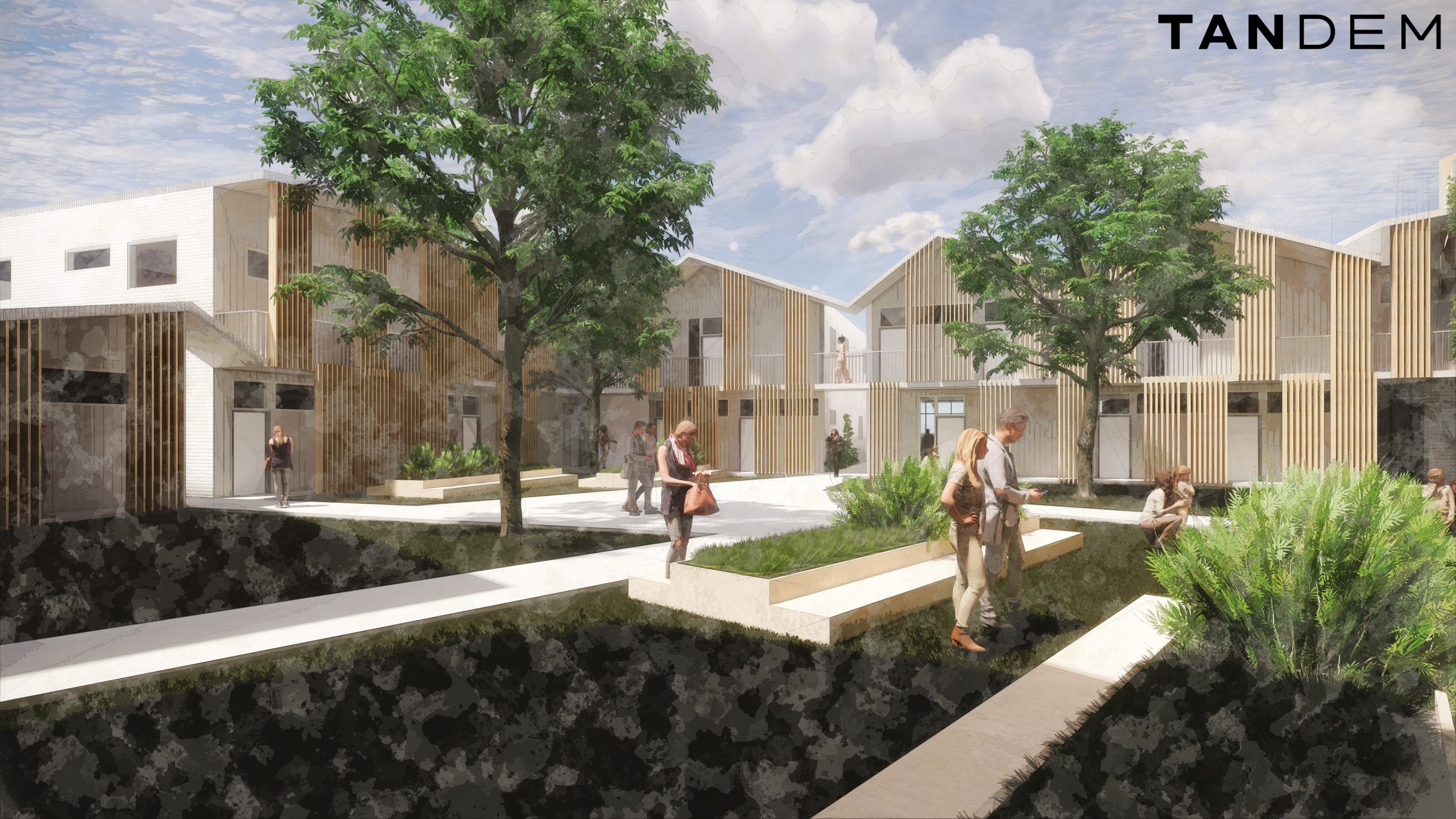 From housing a majority of Anglo-Saxon tenants upon opening in the 1960s, to the current cohort of mostly elderly Filipina women, the club’s residents reflect Australia’s changing social landscape. Today’s Footscray Lions Cooperative Village residents, many of whom are widowed, are bolstered by this shared migrant experience, enjoying the familiar languages and food of their homeland. Aged between mid-60s to their 90s, the vibrant community enjoys a colourful variety of group activities including karaoke, bingo, line dancing and tai chi; with birthdays, wakes and Filipino mass celebrated together in the community centre.

Spritely 81-year old Lionsville resident Anicia has acted as a live-in liaison for the past 10 years, playing a vital role in communicating with her neighbours and the Lions Club.

“All the people living in our village are happy and safe. They only leave if they pass away or go to a nursing home. Until then, they prefer to live here.” says Anicia. “Some are a little worried about moving, but we’re all very excited about living in our new homes when they’re finished.” The new Footscray Lions Cooperative Village is scheduled to open in April 2023.

TANDEM’s involvement in the Footscray Lions Cooperative Village redevelopment is fortuitously timed to take advantage of the Big Housing Build announced by the state government as a major post-lockdown economic and industry stimulus strategy in late 2020. This initiative represents $5.3 billion allocated to build 12,000 social housing projects in Melbourne and regional areas.

The pathway to securing this funding has been complex, requiring significant planning and investment. It is therefore, a great relief and immense achievement that the reimagined Footscray Lions Cooperative Village has been successful in securing funding from The Big Victorian Build. The funding is a welcome lifeline for this small, resilient community operation and an apt reward for the Lions Club, who have volunteered and rallied for decades to honour their legacy of goodwill.

“We’ve been here for 60 years, working to the best of our ability to make sure this place feels like home,” says Bert. “We have got to be doing something right. It has to be of value.”