For 15 years, Melbourne architecture practice, TANDEM design studio, has been a collaboration between Tim Hill and James Murray. The pair met at Lab Architecture studio while working on Federation Square and have gone on to work on other significant urban regeneration projects such as the Museum of Old and New Art (MONA); the Queen Victoria Market; and a significant transit-oriented-development project adjacent South Kensington railway station in Melbourne.

In 2020 the duo is shaking things up, introducing a new director: academic, architect and urban designer, Dr Kathi Holt. They are also expanding their footprint into Brisbane, giving the studio a presence in two of Australia’s fastest-growing cities.

Tim, how did you and Kathi first meet?

So I met Kathi as a student at Melbourne University, where she was teaching 2nd-year design. I selected Kathi to be my supervisor in 5th year so by the time I graduated, we knew each other relatively well I think, as teacher and student.

Kathi, what brought you to Melbourne?

I migrated from South Africa after graduating as an architect. I landed in Melbourne in April 1990 into the recession that Paul Keating said we had to have. Architectural work was in short supply so I decided to do my masters at the University of Melbourne, which launched my career in teaching and research.

Kathi, when were you first introduced to James?

In 1998 I returned to Melbourne from a sabbatical at Columbia University NY and a colleague, Thomas Leeser, introduced me to the team at Lab Architecture Studio. It was then that I reconnected with Tim and was introduced to James.

How did the three of you first come to work together professionally?

Tim: James and I set up TANDEM in 2005 after leaving Lab Architecture Studio where we’d worked on Melbourne’s Federation Square, more or less from start to finish. With this experience in designing museums and cultural space, Nonda Katsildis approached TANDEM to work on MONA in Hobart – SOHO China then asked us back to finalise an unfinished project in Beijing. Early in the trajectory of TANDEM, in about 2006, Kathi offered us a really interesting urban regeneration project with Queensland Rail. The work Kathi brought to TANDEM was a welcome return to Australia.

Kathi: At that time, I was an Associate Professor and Head of Urban Design at Queensland University of Technology. I was working on an Australian Research Council-funded project looking at transit-oriented development. QLD Rail and QLD Transport were two of the industry partners who were interested in what was coming out of the research. They commissioned us to look at integrating mixed-use development in some of their inner-city stations, like Toowong, Milton and South Brisbane, as well as Cleveland. We took it further and explored alternative models of housing, providing some novel approaches to public space and community facilities in stations. These were real pieces of the city and the clients wanted to understand how they could deliver more value in terms of social and housing opportunities.

Tim: We maintained a friendship and professional connections subsequent to that. My parents are in Queensland so would travel up regularly and catch up with Kathi, and she would bring groups of students through our studio in Melbourne.

Kathi: In running the Masters of Urban Design at QUT, I’d found study tours to be very effective over the years, especially to Melbourne, which had been my home and the testbed for my research for 13 years. Tim and James were always very generous, opening up their studio and giving fabulous inside information tours around Federation Square and other pieces of the city like Queen Victoria Market. It became the highlight of these trips, and continued for many years.

How did the collaboration on RAPID_AS come about?

Tim: During one of my recent trips up to Brisbane, Kathi and I were driving down one of those freeways along the river and we were talking about the problem of housing in Australia and Kathi said, “This is the sort of thing we can do a research project on”, and I said, “Let’s do it”. I had just finished building True North, which is where I live at the moment and so the whole thing about the challenges in the Australian construction industry was fresh in my mind. So I guess I was complaining about problems: nothing ever gets finished on time; it’s always too expensive; what they say they’re going to charge you, and what they, actually charge you, are never the same; and all that sort of stuff.

At the same time, a real interest in construction had emerged in our practice at TANDEM. James and I were both really interested in how to actually deal with putting buildings together, particularly around small houses near the city.

Kathi: We developed a Cooperative Research Centre – Project application around prototyping affordable housing models. Although we weren’t successful in winning a grant, we learned a great deal about the back end of the timber construction industry and manufacturing processes. In the end, the time we spent doing the research in preparation for the grant, actually progressed the project sufficiently to test the ideas in a demonstrator. It was through exploring that, via our networks in both Brisbane and Melbourne, that we came to formalising an ongoing working relationship. 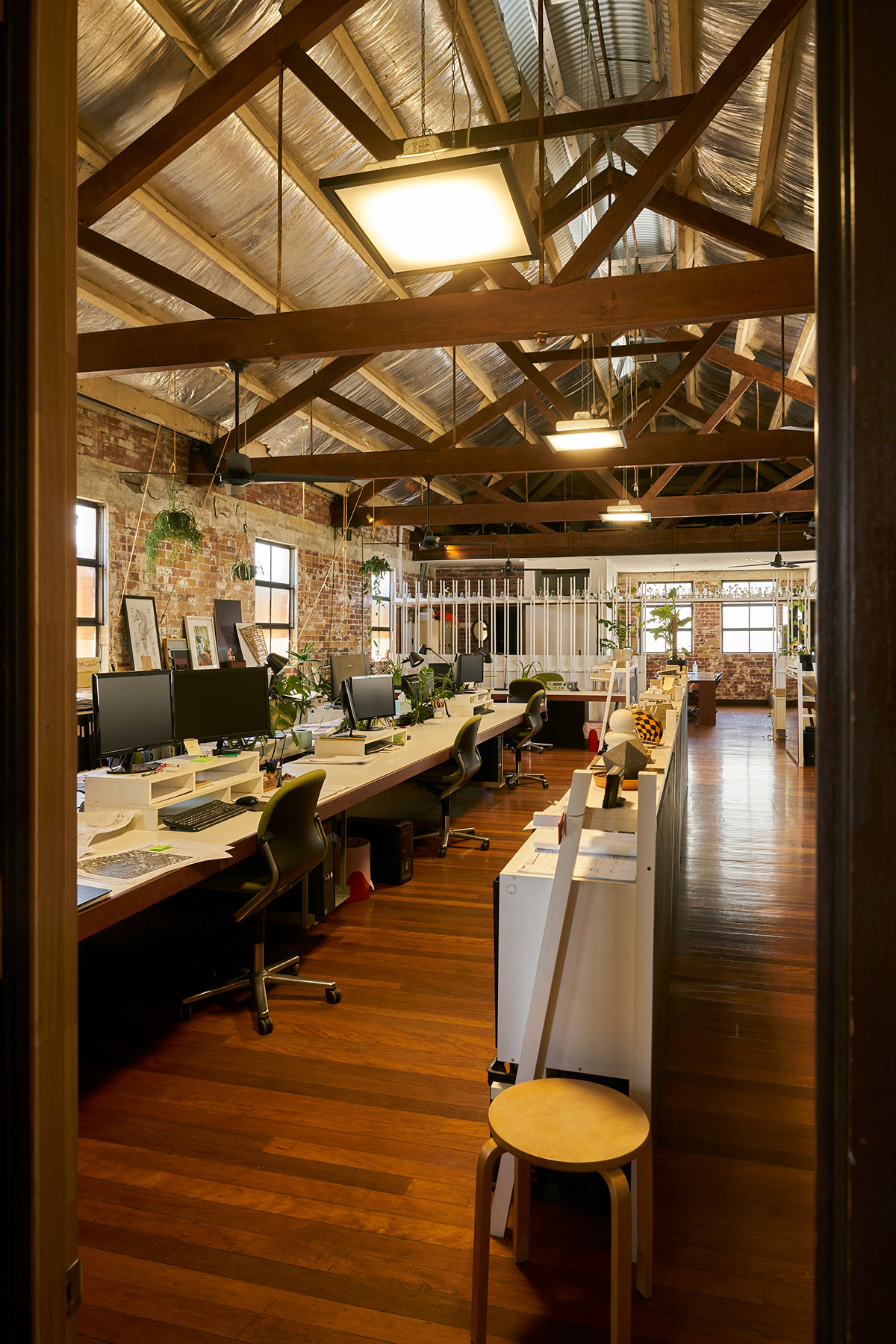 James, what does Kathi bring to the work at TANDEM?

The biggest thing that I think Kathi’s brought to TANDEM is really questioning what we’re about, what we are doing, and where we are heading. I think Tim and I, after 15 years of running a practice together and 7 years working together before that, were perhaps getting bogged down in the commercial aspects of running the practice.

Kathi’s nature is incredibly inquisitive, her ability to think at a strategic level and really strong moral and ethical overlay has really enhanced what we are doing at TANDEM. It’s led to a lot of conversations that weren’t happening before. Building a research component into a practice through conventional fees is really difficult, but Kathi brings a whole system of working that means we’re asking new questions.

The projects that have come out of this recent collaboration with Kathi are some of the most interesting work TANDEM’s done and have opened us up to new groups of people through Kathi’s connections. I think the experimental and the research-based approach is something that we really were expanding into the business, and while it may not be for every project, it’s already showing a lot of fruits in terms of the kinds of people we are talking to and some of the commercial opportunities that have come about.

I’d say Kathi’s a pretty amazing people-person as well. Kathi has an ability to make connections with people from inside and outside the industry, and bring people into forums and effectively manage those forums. As TANDEM grows, I think it’s going to become more and more important that we have those kinds of qualities in the people that are leading.

Kathi, what excites you about working with TANDEM

My particular values around stewardship and making a difference, align very closely with TANDEM’s ‘making things better – making better things’ positioning. They are a key to leaving a legacy of social and environmental sustainability.
I also respect the creativity that Tim and James have nurtured in their studio; not driven by egos, but rather underpinned by a strong design competency and culture of collaboration.

What is the collective vision for the Brisbane studio?

Tim: We want to use our experience to leverage into interesting work as quickly as possible. We’re currently working on the first BioPharm for Australia, informed by some ground-breaking scientific technology and equally inspiring collaborators. I’d like to see us building the office to around 6 people in Brisbane, and to continue to move onto the next large-scale project opportunity.

TANDEM’s vision for Brisbane is to build on the collaborative and creative roots of the Melbourne studio, which has graduated from smaller residential commissions to larger urban regeneration projects on the edge of the CBD in North, West and South Melbourne. These projects include the QVM Renewal, build-to-rent, industrial enterprise and hi-tech manufacture – returning, in a sense, to our formative experience with large mixed-use projects like MONA and Federation Square.

Kathi: Brisbane has always had a different attitude to urban design and development. There’s also a sensibility to climate, topography, and amenity, allowing for more open, inclusive public spaces and architecture that I think TANDEM would embrace easily.
The value of research and social awareness to the community, clients and investors yields more than a cash return for investment, aligning well with global trends and ethical investments.

What will underpin the Brisbane office is that every piece of work, whether it’s research or a commission will be viewed as a piece of the city, in terms of what that means for the people and communities who use it, who live in it, who experience it – economically, politically, socially, and most importantly, environmentally.

James: I am excited about the possibilities and I think there are real opportunities in Brisbane and working between the two cities with a new and extended skill set that will bring insights and allow us to offer more to our clients.